This is an on-going project to assess the performance of various VESA Local Bus cards.

The first card in my roundup is SPEA made V7 Mirage based on S3 805 chipset. This was one of the better early VL-Bus VGA chipsets. The cards also come with 1 MB DRAM of relatively fast 50ns speed. The card showed a good performance in DOS, just below the group of top performers. In Windows, the performance was below average though.

The second S3 805 based card in the test is an interesting one. It is a rare combination of VGA card with a sound card. It is meant to be business-oriented so don’t expect AdLib compatibility, but at least a Sound Blaster compatible sound chip is there. VGA performance is almost identical to the V7 Mirage in DOS, which mean average performance. In Windows, it is somewhat slower in the true-colour mode which could be a driver issue. 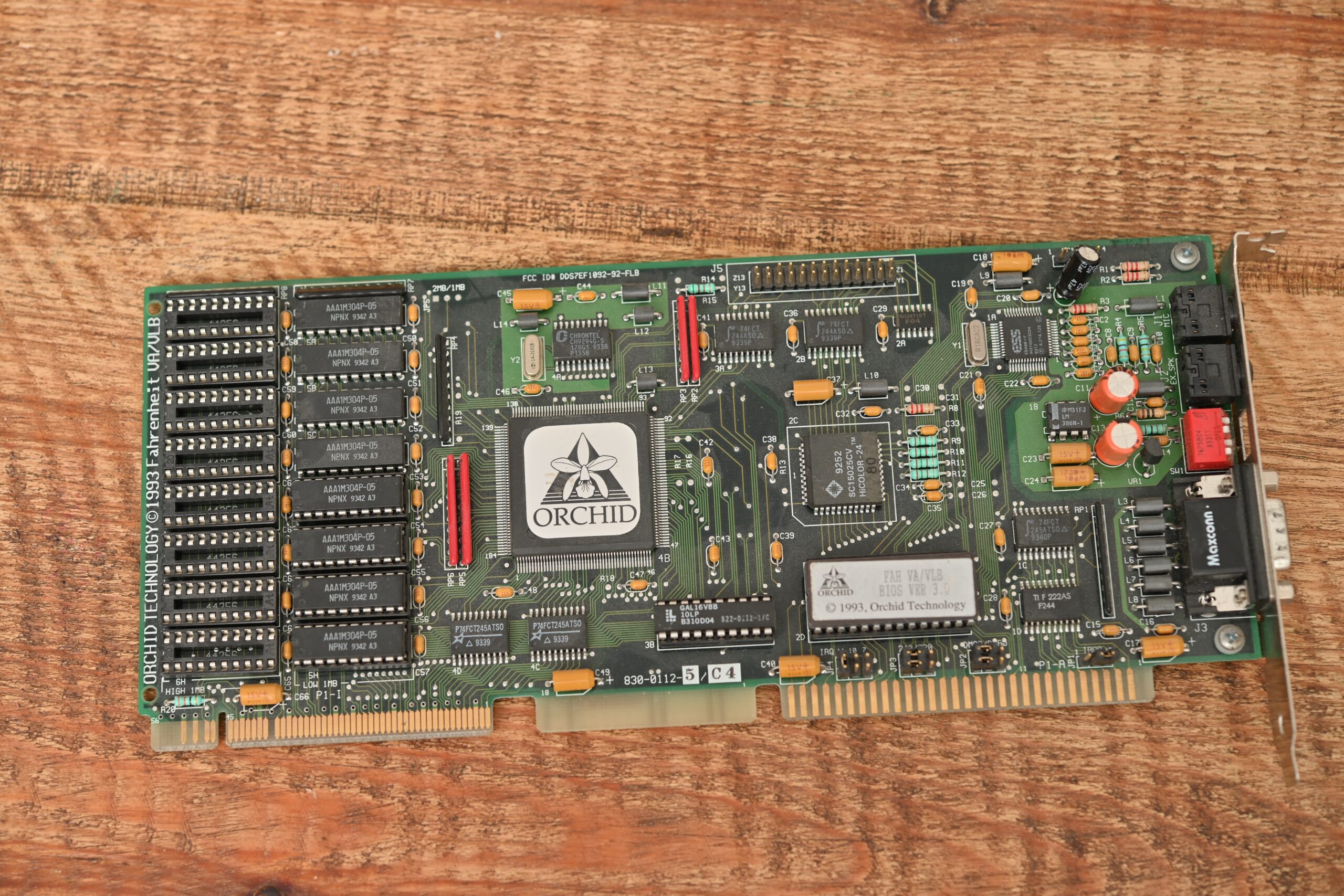 The Diamond Viper VLB is a high-end card from 1993. Weitek P9000 chip is a competent Windows accelerator with 2 MB dual-ported VRAM. As the 9000 is not VGA compatible, the card contains also the Weitek 5286 chip sitting on the ISA bus using a dedicated 1 MB RAM. The idea here is that the 5286 handles VGA modes until you load a GUI driver. Then the V9000 chip takes over.

Performance of this solution proved to be very bad in DOS. It is easily the slowest card in the test. In Windows, it performs much better, but there are simply better cards. It should be noted that I had problems finding stable drivers to even complete benchmarks.

It was also the only board in my test that couldn’t handle 0 wait state setting on my 43 MHz VLB test system which surely had some impact on performance.

One trick to improve DOS performance is to load a VBE driver. Then VESA compatible apps could run on the Weitek 9000 delivering much better performance than when using the mediocre 5286 chip. Note the relatively solid PC Bench score in VESA mode was obtained by using this trick.

This is a surprise of the test. Initially, it did not perform very well. However, this 1 MB card with fast 45ns DRAM chips and WD90C33-ZZ chip can be switched to zero waitstate operation using one of several undocumented jumpers located next to VGA connector. Then the card performs very well and essentially matches the leaders of the test in DOS. Sadly, I haven’t tested this card in Windows.

This generic Cirrus Logic GD5424 on this generic low-end card is a very basic VLB chipset. It is a passive VGA card – it has no acceleration features whatsoever. The GD5424 is essentially a scaled-up version of the popular CL-GD5422 for ISA bus with a noticeable boost thanks to the faster bus.

As a result, there is no surprise it doesn’t particularly excel in Windows. It is two times slower than the accelerated GD-5429 sibling and the slowest card in the test. Performance in DOS is below average, but there are only small differences in the tear this card competes in. 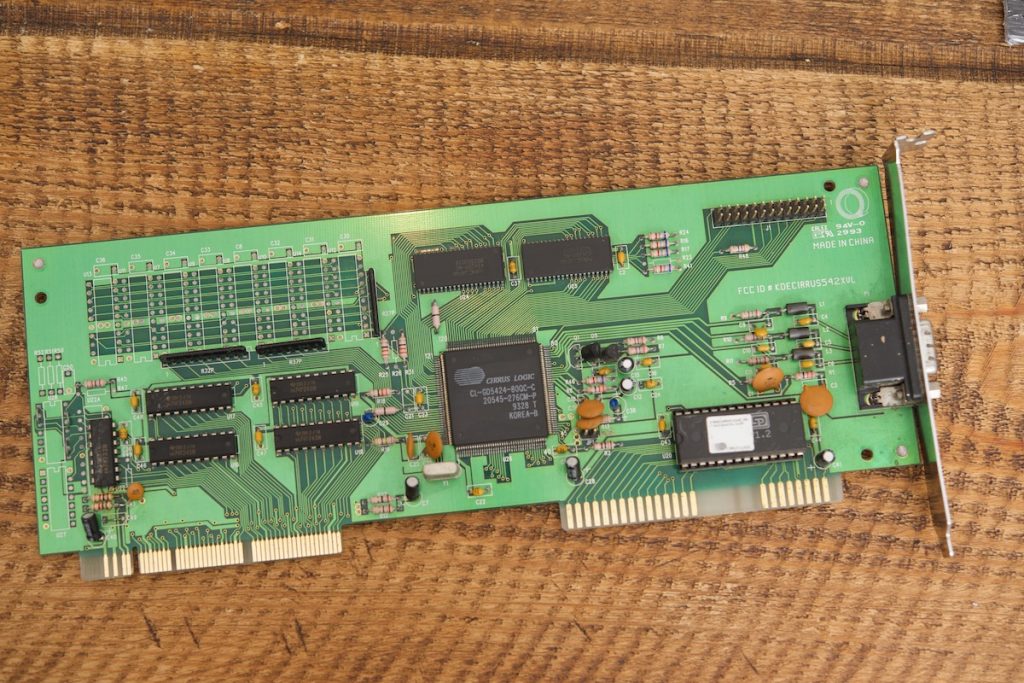 The second Cirrus Logic chip comes on this SPEA branded V7 Vega card. Unlike the GD5424, the CL-GD5428 chipset has some acceleration capabilities which however have no effect whatsoever in DOS. In general, the card delivers below-average performance in DOS close to the GD5422 sibling. Sadly this card hasn’t been tested in Windows but I’d expect it to be in spitting distance to GD-5429. 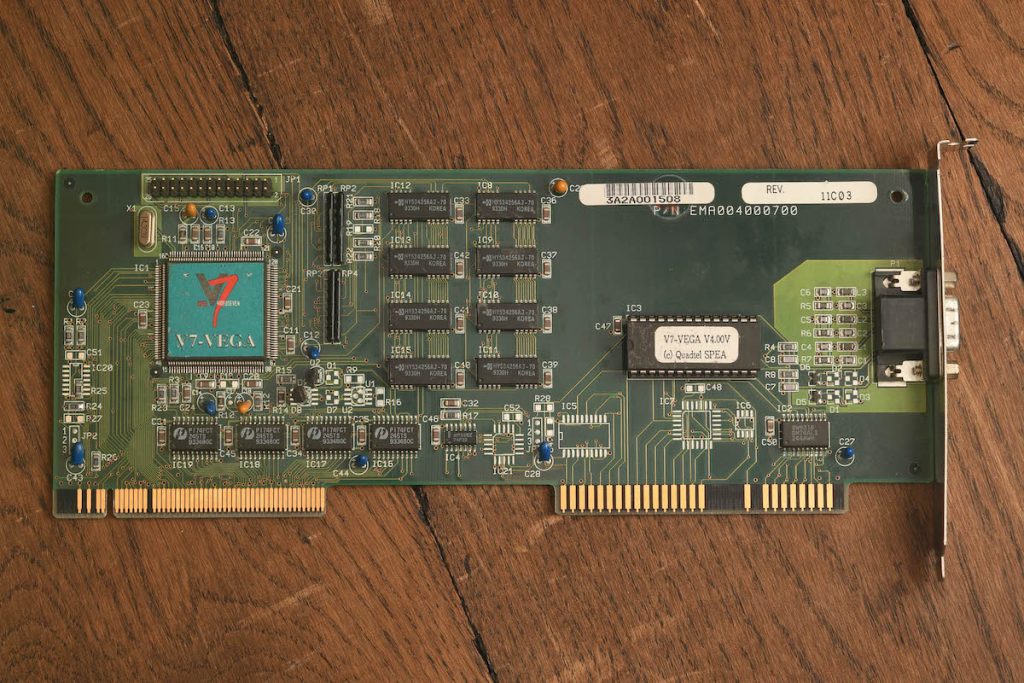 The last Cirrus Logic card in my roundup use somewhat more advanced GD5429 chip. Compared to CL-GD5428 It has even more improved GUI acceleration. The card can be upgraded to 2MB DRAM, but this upgrade is a bit pointless as the only benefit it brings is the support of two extra interlaced resolutions. Those hoping for more colours or improved performance will be disappointed. Performance-wise the card is average in DOS but rather average in Windows, especially when using true-colour mode. But slightly better than cards with older chips.

For a local-bus card, the Trio64 is one of the most advanced VGA chips. It is a highly integrated 64bit chip with integrated RAMDAC and 2MB DRAM. This Diamond branded card showed the best performance in Windows and shares also the top spot in DOS. The memory throughput card can be also tweaked by MCLK utility which delivers even higher performance (the card has been tested in stock config in this test).

This card is probably paramount of what’s available on the VESA Local Bus. Only some VRAM based high-end cards with S3 964 or 968 chips could be potentially even faster at high-resolution modes in Windows.

The card showed the top performance in DOS and was very fast in Windows too – just short of more advanced Diamond Stealth 64 card.

ATI had several product lines in this era. This card was their low-end offering. Mach32 was a relatively early 90s chip but is simply no match to more modern chips. Performance in DOS is below average beaten even by Cirrus Logic chips. Also, VESA compatibility isn’t good. I couldn’t run the PCP Benchmark even when loading VESA tools.

The second ATI card is way more advanced ATI Winturbo which sports more advanced Mach64 chip. The chip is accompanied by 2MB of VRAM. The VRAM is non-upgradeable on this particular card which creates a difference between Winturbo and Graphics Pro Turbo.

Although better than the ATI Graphics Wonder performance of this cards lags behind expectation in DOS and just average in Windows which is surprising given by 64-bit and VRAM combination.

What I liked is the output quality and also the default fonts in text modes gave it q quite unique look of the DOS prompt.

This somewhat different OEM card uses S3 Vision 864 chip and 2MB DRAM. A unique feature of this card is it can be upgraded to 4 MB. Not many VL-Bus cards can be upgraded to 4 MB and especially not those with DRAM. Whether the upgrade is useful on this particular card is questionable. The card has relatively modest 130 MHz AT&T DAC chip which has to share bandwidth with the graphics chip. Not a great recipe for super-high-resolution work at high bit depth.

It is not without interest that the graphics core in S3 Trio64 is derived from S3 864. Thus I’d expect very similar performance as the Diamond Stealth 64 DRAM T card. And results prove that. DOS results are almost identical. In Windows, the DEC card is a little slower. Presumably, drivers or a different memory clock plays a role. However, still a very decent performance.

This modest-looking budget ARK1000 based card came as a surprise. Despite the modest look and having only 1 MB of RAM it decisively won the test in DOS. Sadly accelerated Windows performance did not follow the suit and the performance was below average. Especially in high-resolution modes. This could be a driver issue. 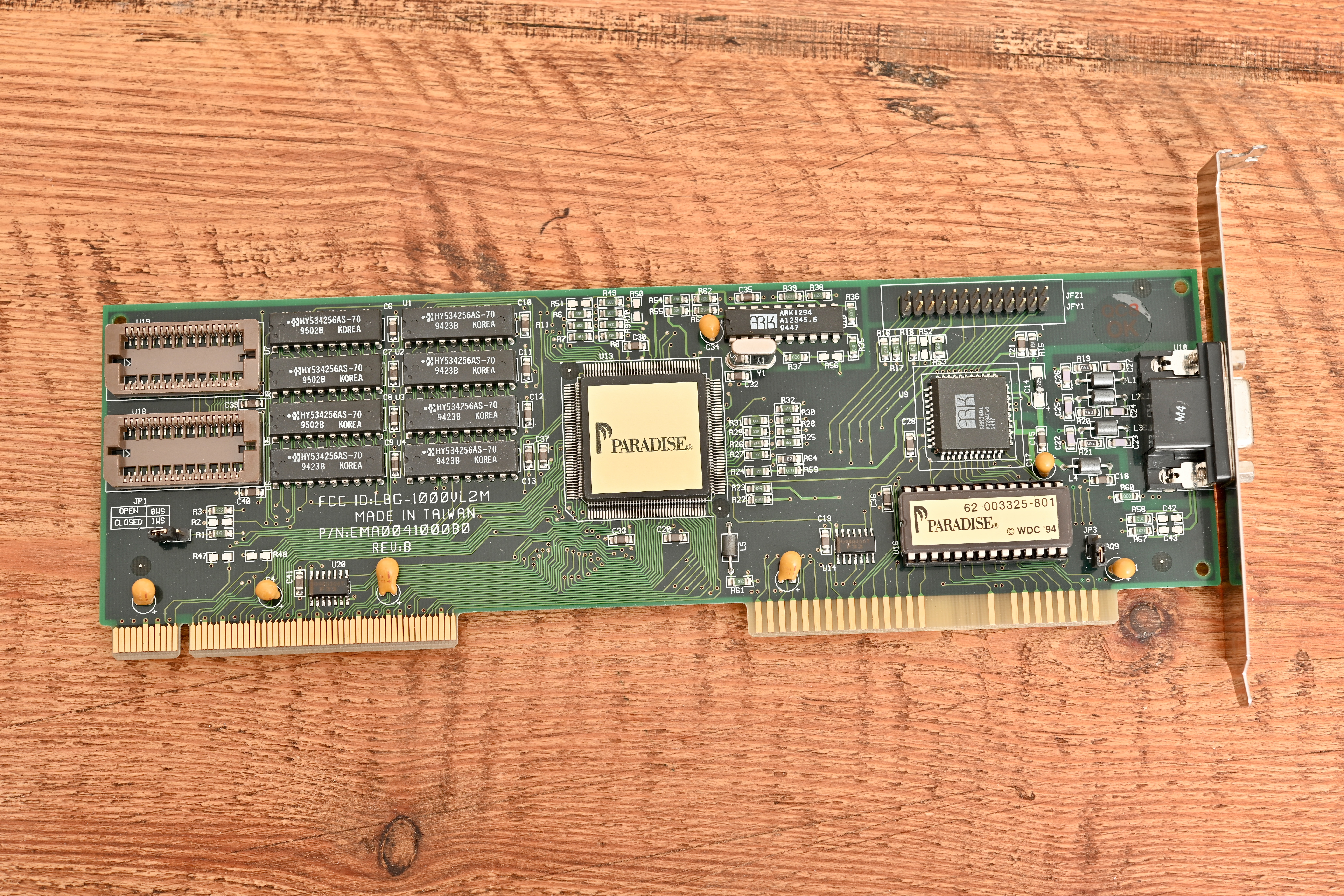 The vendor of this ALG2228 based card couldn’t be identified. However, Spea sold almost identical card under Vega Plus branding. The Advanced Logic ALG2228 combined with 1MB DRAM showed mediocre performance in DOS and rather disappointing showing in Windows, especially at high resolution. It was a budget card back in its days and doesn’t shine today. 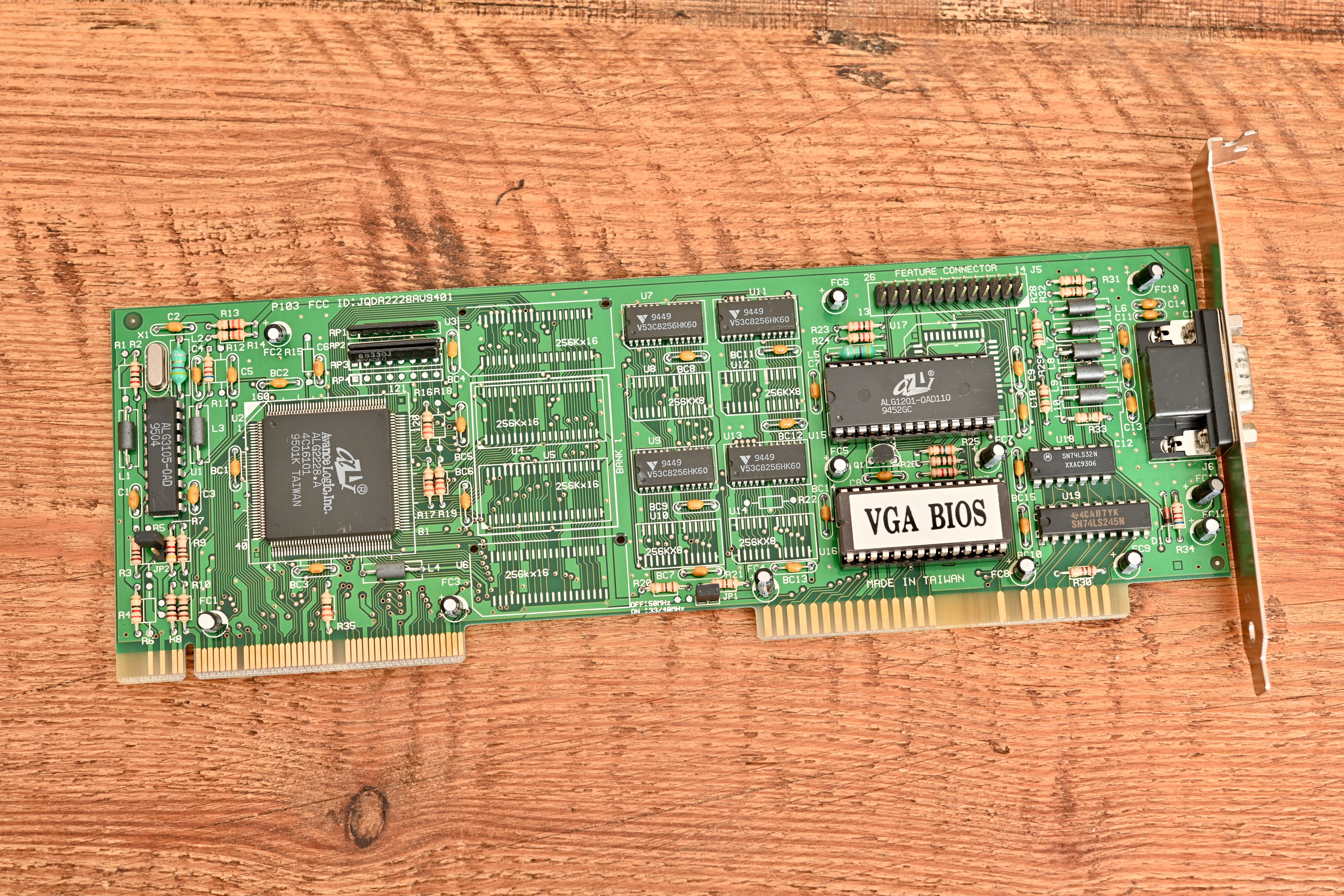 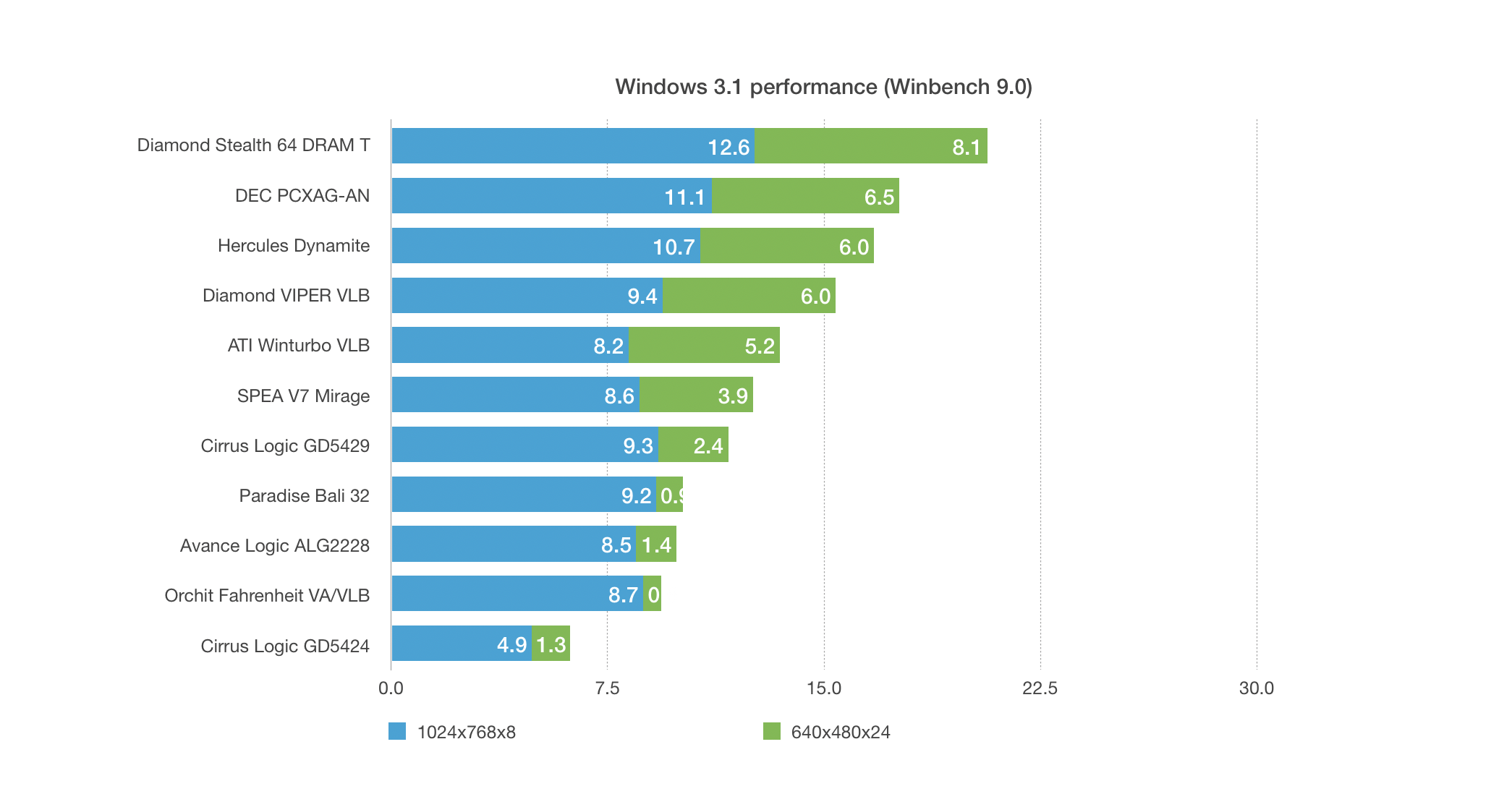 In DOS no extra tools were loaded unless required to complete the test.

In DOS there aren’t big differences between chips. Still, the cards could be split into three tiers. In the first tear, there is ARK1000P based Bali32 which is the undisputed king of DOS performance.  Shortly following are cards with Tseng ET4000 w32, S3 Trio64/Vision chips or WD90C33-ZZ chip. These deliver a high performance which is probably only limited by the bus interface speed and CPU. The second tier includes pretty much all other chips. S3 805 is perhaps the fastest of that group. And finally there Weitek based cards where VGA is only an afterthought and deliver sub-standard performance.

The situation gets much more interesting in Windows where acceleration features, speed and type of VRAM and also the quality of drivers makes a difference. Bali32 suffers from slow DRAM interface and can’t keep up with premium cards. The S3 Trio64 confirms the position of the most advanced chip and leads the group. Surprisingly can beat even VRAM based accelerated cards. But this can be down to relatively low resolutions used in the test.